A joyful cheer... a raised fist... an upward roll of the eyes... no matter where you come from, you can decode these signals without a dictionary. You don't always need words to communicate but they sure can make a big difference.

"I wasn't mature enough before to understand how much weight words can have," says producer Sir Bob Cornelius Rifo, mastermind of The Bloody Beetroots. Now, as his music evolves to a higher state, language- in all its gravity and fluidity- plays a pivotal role as heard on this third album 'The Great Electronic Swindle' for Last Gang Records.

Certainly, language barriers didn't stop the Italian-born Rifo from connecting with audiences worldwide almost immediately after he unleashed The Bloody Beetroots in late 2006. Inspired by Rifo's lifelong love of comic books and punk rock, the visceral kick of the Beetroots' sound has featured prominently in TV shows and video games, and powered dozens of remixes for artists including Chemical Brothers, Depeche Mode, The Refused, Peaches and Britney Spears.

The Bloody Beetroots and Sir Bob Cornelius Rifo's discography features a string of successful EPs and two full length albums (2009's 'Roborama' and 2013's 'Hide' ) - including collaborations with Sir Paul McCartney, Tommy Lee, Steve Aoki, Peter Frampton and many more.
Clubs, theaters and festivals around the world have thrilled to different incarnations of The Bloody Beetroots' incendiary live show. From Coachella and Lollapalooza to Governor's Ball and Big Day Out, The Bloody Beetroots Live have entertained millions across six continents.

Rifo doesn't just want to entertain audiences; he strives to engage and challenge them, emotionally and intellectually. Changes in Rifo's personal life and the world in general have inspired him to speak with increasing openness-and listen attentively to the words and ideas of others as well. That in turn enabled Rifo to work more closely with myriad artists on this album.

"I'm much more emotionally involved with the words," says Rifo of the new material, and cites the beers, bonding, and heartfelt conversation shared with Rival Sons front man Jay Buchanan while creating the passionate 'Nothing But Love' as a prime example.
"Sometimes it is said, 'Music saved my life,' but I say, 'JAY saved my life,'" adds Rifo. "He managed to translate into words all the heartache I was in and he calmly & patiently explored a great personal path of recovery for me. Without him, this song would not be real and I would probably not be here to talk about it."

Perry Farrell - frontman for alt. rock legends Jane's Addiction and creator of Lollapalooza - joins on 'Pirates, Punks & Politics'. "I met Perry four years ago and I remember us creating a unique bond. So we got in touch and spent a few nights talking about politics and how to save the world," explains Rifo of the politically charged track.
"Unprogrammed maths, something unexpected, helped us to forge a very powerful song that we hope it can somehow weave into the White House."

Fundamentals of melody and harmony that Rifo learned via his childhood studies of classical music play an increased role in the new Bloody Beetroots material. "I wanted to retain the spirit and maintain the energy of electronic music, but keep it rooted in analog and bring in something original," he explains. "So I started from scratch and began playing guitar again."

Swedish songstress Greta Svabo Bech, known best for her deadmau5 collaboration 'Raise Your Weapon' joins The Bloody Beetroots on two album cuts 'Invisible' and 'The Great Run'. "Greta is the White Princess of the Faroe Islands. I have had the honor and pleasure to stay in the islands for a while and to exchange many words and harmonies with which we have written about a love story. Both 'Invisible' and 'The Great Run' are linked to each other," says Rifo. "A novel in two chapters recorded during a snowfall in the Faroe Islands. It is a story of a girl who runs away from a relationship to start an individual course. It is a beautiful chronicle that sits both on sweet melancholy and a reinforced concrete wall."

The Bloody Beetroots sought out singers who matched the voices he heard in his head and incorporated their ideas into the new tracks too.
'My Name Is Thunder' was released as a double-single with Rifo and Australian rockers JET each producing versions respectively. "I knew this song needed a certain rock tone... a tone like Nic Cester of Jet had.
We thought instead of someone 'like Nic Cester,' how about we get the real Nic Cester! Thinking he would be in Australia, it was fate that he lived just a couple hours away from me in Italy. I found him," says Rifo. "We worked together, ate together, drank together and created something very powerful together. Around this time the Jet guys stared talking and thinking about getting back together, when Nic shared this with his bandmates, the idea came up to have ALL of Jet involved.
Because of our different influences, we had different ideas on the mixing and from that we came up with two versions. It's the best of both our worlds!"

'All Black Everything' is one of the most powerful songs of the album - the perfect combination between two states of anger: U.K. hardcore punks Gallows & TBB. Songs 'Kill or Be Killed' with Prayers, 'Irreversible' with Anders Friden of In Flames and 'Enter The Void' with Foxy Shazam's Eric Nally emerged.

This creative process requires more work and concentration, but that modus operandi suits Rifo. "You have to take the time to create something consistently relevant," he stresses. In an era where rapidfire accumulation of likes and retweets mint new "pop culture" icons in moments, Rifo strives to create true counterculture, investing hours, ideas, and energy to make art that rubs against the grain.

Towards that end, he continues to work with Tanino Liberatore, the legendary Italian comic author and illustrator for the cover of 'The Great Electronic Swindle'. An early and enduring inspiration to Rifo, Liberatore created RanXerox, one of the most iconic anti-heroes featured in the pages of Heavy Metal. Record collectors will recognize Liberatore's work from album covers including Frank Zappa's 'The Man from Utopia', and his striking images- previously showcased on the sleeve art for 'Romborama' and 'Hide' - remain an integral element of Rifo's visual presentation.

"I want to open a little window on to the meaning of freedom, and what art and music should be in a society," concludes Rifo. As he celebrates the tenth anniversary of Bloody Beetroots with a reinvigorated attitude and his best music yet, he's quick to reiterate that this is only the latest chapter in a story that's still unfolding. "As long as I'm vertical, I've got to keep evolving."

The Bloody Beetroots' 'The Great Electronic Swindle' will be released October 20, 2017 on Last Gang Records. 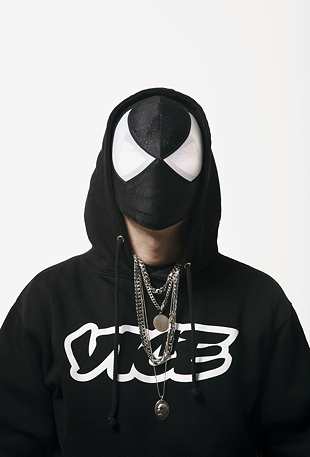