TAAHLIAH is a rising star from Glasgow. After making her name in the underground queer club scenes of Berlin & Glasgow as a DJ and remixer, she took to the stage as a producer in 2021, releasing on London label untitled (recs).

Throughout Angelica, TAAHLIAH details a range of autobiographical experiences that have come to shape her as a person and an artist: from coming to terms with being trans (Brave), to coming from a working class background (Bourgeoisie); from breaking up (Tears) to falling in love (Freefalling). As TAAHLIAH seeks to represent and bring visibility to her community – she invariably ends up conveying universal messages of power, acceptance, bravery and euphoric fun.

TAAHLIAH has placed herself at the centre of a new generation of electronic producers revitalising both Dance & Pop music, sharing stages with SOPHIE, LSDXOXO, 100 Gecs, A.G Cook & Eris Drew amongst others. With her track ‘Electronica Vividness’ handpicked to feature on the inaugural release of SHERELLE’s freshly launched label, BEAUTIFUL, TAAHLIAH continues to hold her place amongst the main players of the electronic music landscape.

As well as receiving praise from Mixmag, Dummy, DJ Mag, Line of Best Fit, and BBC Radio 1, TAAHLIAH is the first black trans artist to be nominated at the Scottish Alternative Music Awards – and the first artist to ever be nominated and win in two categories in the same year. 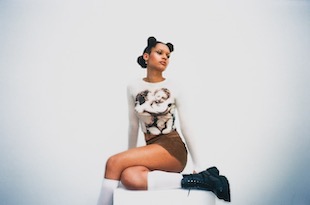